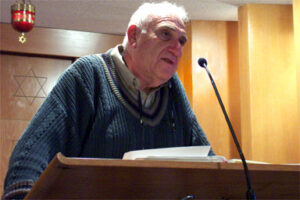 Allan Levine z’l was our Rabbi from 1962 to 1970. He was a remarkable man, dedicated to social justice. During the 1960’s, he was a Freedom Rider, having organized the first clergy Freedom Ride. He worked with Martin Luther King Jr., was jailed in Jackson, Mississippi, and faced angry police officers who threatened him with their guns. In spite of this kind of danger (including death threats), he continued his work for civil rights. He told his congregation in Bradford, Pa, that his work was a matter of conscience, that they could not tell him not to go, and that he would do what was needed.

In Rochester, Rabbi Levine learned that an African American man, Rufus Fairwell, had been beaten by a police officer while he was closing the gasoline station where he worked. There was no justification for the beating and Allan lodged a complaint against the officer and staged a sit-in at Rochester police headquarters. After the incident, Rabbi Levine became involved in the Rochester community, serving on the boards of the local branch of the NAACP and Friends of FIGHT, and being active in CORE. When Rabbi Levine left Rochester, he was honored with a dinner that was attended by over 300 members of the community.

Rabbi Levine was passionate on the pulpit – at his first sermon with us, he pounded the lectern while speaking about social justice. Gail Vail remembers: “I cannot listen to the Torah portion on Rosh HaShanah about Abraham and the sacrifice of Isaac without immediately being transported back in my memory to services downtown. Allan didn’t just read the passage [about the Akida], he roared it. ‘Avraham! Avraham!’ If you were asleep, you just woke up, and you were scared. And when Abraham answered ‘Hineni,’ ‘Here I am,’ you whimpered it along with him.” At Shabbat services, Rabbi Levine led discussions which continued at his home following the service.

Rabbi Levine was very much involved with our children. At Temple Emanu-El, he worked with them in our youth group, taking them to New York City, where they met Cassius Clay, and to NELFTY (North East Lakes Federation of Temple Youth) camp in Halliburton, Ontario. During the late 1960’s, Rabbi Levine was the director of NELFTY’s Mitzvah Corps, leading teenagers to Beth Shemen Youth Village in Israel on study and work programs. After he made Aliya to Israel in 1970, Rabbi Levine became a family counselor at Beth Shemen and later, helped found two Reform Kibutzim. 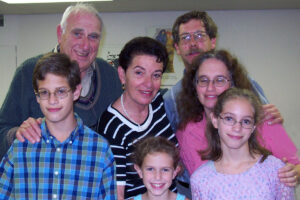 Top photo: Rabbi Levine speaking to us from the bimah in our Irondequoit building
Left photo: Allan Levine and his wife, Suzy Levine in 2001 with Gail and David Vail and their family
Right photo: Suzy Levine and Janet Wagner z’l in 2001

To return to the Our History page, click here.