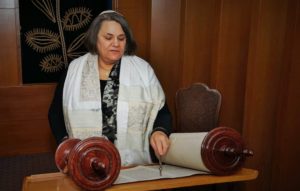 The Hebrew name of our people, “Yisrael,” means “God wrestler.” The Jewish tradition of argument is a central part of our culture and history. We question all authority, including that of God, as evidenced by this week’s Torah portion. God tells Abraham of a plan to destroy the cities of Sodom and Gemorrah and all their inhabitants for their wickedness. In answer, Abraham not only argues but implies that God is in the wrong:

This story comes a week after we read about Noah, who did not object when God told him all living things on earth would be destroyed with the exception of his family and the animals on the ark. Noah obeyed God without comment. In contrast, Abraham is clearly distressed by God’s plans and speaks out.

This difference between Noah and Abraham is what those who study the Shoah have come to call the difference between a bystander and an upstander. A bystander witnesses injustice without engagement, while an upstander takes action of some kind to stop it. While few of us, thank goodness, will ever be faced with the need to act in the face of genocide or war, all of us have the opportunity to be upstanders. Especially at a time when hateful language has become so prevalent in our public discourse, we can act to interrupt and counter it. It can be something as simple as saying, “I don’t feel comfortable with that word/joke/idea,” or speaking from personal experience about the injury certain concepts have done. Like Abraham, we can all, in our own way, seek to insure that justice is done.